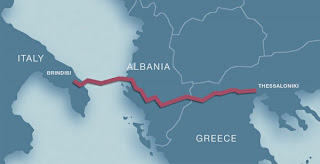 The Trans Adriatic Pipeline (TAP), the southern competitor for carrying Caspian gas from the Turkish border to Europe, has received an economic boost.  British Petroleum and Total have signed an agreement with the State Oil Company of Azerbaijan (Socar) to fund the pipeline, designed to bring natural gas to Italy.   (The proposed Nabucco West would carry gas from the Turkish border to Baumgarten, Austria).  "These funds will contribute toward continued work in several important areas during the period running up to the final routing decision, expected in 2013," said a TAP spokesman.

Kjetil Tungland, TAP's managing director, issued a statement, "The signing of this agreement is a significant vote of confidence in the quality of TAP's technical and commercial solutions from key industrial players, and underpins the cooperation agreement that was signed between TAP and Shah Deniz in June."

While the Shah Deniz consortium has not yet decided between TAP and Nabucco West, TAP's chances have been improved by both the funding, and by the pipeline obtaining government support.  Both the Greek and Italian governments have agreed to support the pipeline, something they previously had not done.  According to the Greek Foreign Ministry, Greek Deputy Energy Minister Makis Papagergiou and his Italian counterpart reached a "close cooperation agreement" to support the pipeline.  The Italian Foreign Ministry added, "Athens and Rome have decided to back the project after Aszerbaijan's Shah Deniz 2 consortium chose TAP to transport gas to western Europe.  Nabucco West remains an alternative..."

With the Shah Deniz consortium sitting on the fence, other interested parties are also trying to cover all their bets.  the European Commission, which had previously said that Nabucco was a priority European project, has backed away.  It now says that it does not favor any project or route over another, as long as it carries Azeri gas, would diversify EU supplies, and would reduce EU dependence on Russian resources.  Similarly, BP is trying to support both TAP and its rival, Nabucco West.  "Our aim is to be involved in all aspects of the project so the aim is to be involved in Nabucco and TAP as well, and this is still being negotiated," BP spokesman Toby Odone said.