Transcaspian Back on the Board 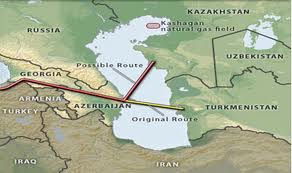 Recent armed spats between Azerbaijan and Turkmenistan in the Caspian Sea placed the future of the Trans Caspian Pipeline in doubt, but European Union-backed talks in Ashkabat appear to have put things back on track.  According to EU spokeswoman Marlene Holzner, the Turkmenistan Energy Minister Myrat Artykow and Azerbaijan Minister for Industry and Energy agreed with EU Energy Commissioner Gunther Oettinger that the project could be an important part of efforts to reduce Europe's dependence on Russian gas supplies.
Holzner said both Azerbaijan and Turkmenistan had expressed a desire to supply Turkmen gas to Europe, but neither country was willing to make any firm commitments.  "Turkmenistan said it continues to be interested in delivering gas to Europe.  Azerbaijan also confirmed its interest in being an 'enabler', meaning it would also be a transit country for gas."

Despite the expressions of good intentions, who moves first to make the pipeline a reality remains in doubt.  Holzner said that the EU was waiting for a gurantee from Turkmenistan on supply (despite the fact that Turkmenistan President Gurbangulu Berdimuhammedov is on record as promising 40 bcm per year for the project).  At the same time, she said that the EU would neither own the pipeline nor pay for it.  For his part, Berdimuhammedov has previously said that while he would sell the gas to Europe, it would be up to the Europeans to figure how to get it from Turkmenistan.  So, all good wishes aside, no progress appears to have been made other than to get the parties talking again.

Turkmenistan appears to have turned its attention east, with most of its gas sales going by pipeline to China.  For Azerbaijan's part, the pipeline could be seen as either competition for its own future gas production, or for Gazprom's South Stream.  In either case, the benefits of a Trans Caspian Pipeline do not appear to be overwhelming.  The one country that would benefit is Turkey, who would like to see Turkmen gas made available to expand the proposed TANAP pipeline.

"With the TANAP project we have created a structure that will allow gas to transit across Azerbaijan and facilitate trade.  This structure is also targeting Turkmen gas.  We are seeking Turkmen gas," said Turkish Energy Minister Taner Yilmaz.

According to Gulmira Rzayeva of the Center for Strategic Studies of Azerbaijan, an expanded TANAP could increase Turkey's chances of joining the European Union.  "Turkey can achieve political gains with this pipeline; it can be an ace in terms of its European Union membership negotiations.  With the finalization of this project, Turkey will have a whole new position within the region."  Whether Turkey wants to join Europe is, of course, an open question.  Turkey's annual growth continues at around 7%, while Europe continues to stagnate and -- possibly--sink back into recession.
Posted by James J. Coyle at 3:14 PM